The LG Velvet is a fairly expensive mid-range phone. However, it arrives before truly affordable 5G phones have become common, so it may not seem a bad deal to some at launch.

That said, the cost is high enough to stop it earning a higher score. Its camera array does not match the price and there’s no quad-DAC – a great audio feature that we’ve come to expect in expensive LG handsets.

Three parts seem similar to truly high-end phone. We’ve already mentioned the first. The LG Velvet has 5G. The LG Velvet has some expensive design touches too, like a curved front glass that makes the screen surround appear smaller.

Its tall OLED screen does not look dissimilar to that of ‘true’ high-end phones either, even if some of its specs are less impressive. 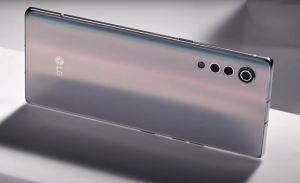 The LG Velvet uses the DAC built into the Qualcomm processor, and the only advanced sound mode is ‘LG 3D Sound Engine’. It can make low bit-rate audiobooks and internet radio stations sound better, adding more spatial information to ‘flat’ sounding content, but alters the sound character too much for music.

And the rest? The LG Velvet has a solid in-screen fingerprint scanner. It has not failed to recognize a thumb once during testing that we can recall but is not the fastest around. The OnePlus 8’s scanner is a touch quicker.

The LG Velvet‘s screen is very tall, with an almost Sony Xperia 1 II-like 20.5:1 aspect ratio, and it has a teardrop notch.

This notch snips out more of the screen than some punch holes, but the display’s sheer height makes this a non-issue.

This is a 6.8-inch 1080 x 2460 P-OLED panel made by LG. LG’s OLED panels are often not quite as good as Samsung’s, or those of the lesser-known Chinese BoE, but this one is perfectly good.

The LG Velvet has three rear cameras. And camera hardware is perhaps the weakest part of this phone when you consider the fairly high price.

We get a 48-megapixel primary camera, an 8-megapixel ultra-wide, and a 5-megapixel depth sensor.

Not only is there a big drop in quality between the primary and secondary cameras, the main one isn’t a jaw-dropper either. The LG Velvet uses the Samsung GM2, a 48MP sensor, with an f/1.8 lens.

Down at pixel level, fine detail is occasionally soft or dithered-looking compared to the best phones at the price, although it is a rough match for the OnePlus 8’s main camera in daylight. There are some other clear oversights.

The phone’s video is good, up to a point. You can shoot at up to 4K, 30 frames per second. And as there’s solid stabilization right up to that resolution, you can shoot in all modes handheld with confidence.

LG also added Steady Cam modes, which use the ultra-wide camera and much more substantial electronic stabilization. However, as the wide camera is of much lower quality, footage just doesn’t look as good, even if it is steady.

The front camera has a 16MP sensor, the SK Hynix hi-1634. You may not have heard of the hardware manufacturer, but this is the second-best camera in the LG Velvet.

The LG Velvet has the Snapdragon 765G chipset, one of the most important processors in the effort to bring down the cost of 5G phones. Even if the LG Velvet itself is not really one of those affordable phones.

It is easy to sneer at a fairly pricey phone that uses a mid-range CPU like the Snapdragon 765G, but the difference in real-world performance between this and the Snapdragon 865 is often very minor. App loads are near-instant and the 8GB of RAM offers plenty of scope for keeping apps in a parked state rather than closing them fully.

The LG Velvet has a 4,300mAh battery. For a phone with a 6.8-inch screen, this capacity is towards the lower end of what is reasonable.

It tends to last a full day of moderate use, with little left in the tank by the end. However, you may find it an issue if you regularly play games or spend a lot of time outdoors, pushing the screen brightness to its max setting.

The LG Velvet gives you 5G at a less than flagship price. It’s certainly not the cheapest 5G phone around, but it’s one of the more affordable ways to get the tech.